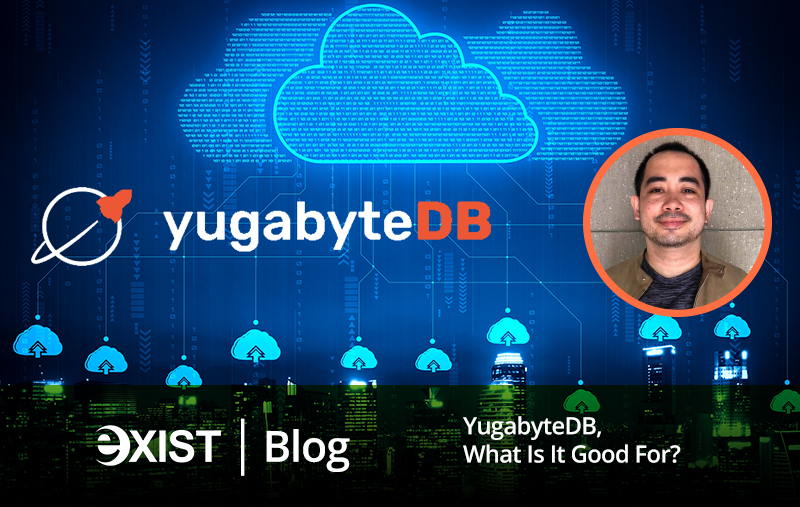 YugabyteDB, What Is It Good For?

The database evolved from the network & hierarchical model of the 60s to what eventually became the dominant force in databases in the 70s up to the present time—the relational model. From this model arose the big names in Relational Database Management Systems like DB2, Oracle, and Sybase. In the 80s, a player emerged that would forever change the RDBMS landscape: Postgres.

Postgres is the only RDBMS to have won DB of the year 3 times: 2017, 2018, & 2020. This speaks of the universal trust that developers have placed on the system and this has only increased with the rise of open-source software and cloud-native computing.

Which begs the question: What is cloud-native computing? To put it simply, the rise in the services-based model championed by the major cloud providers like AWS, GCP, & Azure has given way to a new way of developing applications, with key emphases on scalability, resilience, high-availability, and agile deployments.

Combining the relational supremacy of Postgres and cloud-native computing, we are then faced with the next step in the evolution of the RDBMS—Distributed SQL— and YugabyteDB is the No. 1 Distributed SQL platform today.

What is YugabyteDB good for? I will mention 4: cloud-native applications, applications requiring massive scale, geo-distributed workloads, and traditional RDBMS modernization.

1. Cloud-native applications – Build stateful microservices by leveraging modern cloud-native frameworks such as GraphQL, or in any language of your choice like Django, Spring, Go, etc.

3. Geo-distribution – Move data closer to users for resilience, performance, and compliance with the industry’s largest choice of deployment and replication models.

We have deployed YugabyteDB in several government and educational institutions that employed cloud-native applications development—requiring user connectivity from various geo-locations—along with the migration of MySQL databases.

YugabyteDB has delivered in all of these projects, requiring very minimal tweaking in existing SQL code and even speeding up queries in many instances.

YugabyteDB will very soon be the de facto RDBMS of choice in a cloud-native world.

Explore the next level of your digital transformation journey with our Data Solutions Services. Let’s look at opportunities to better maximize your ROI by turning your data into actionable intelligence. Connect with us today, and we’ll proudly collaborate with you! 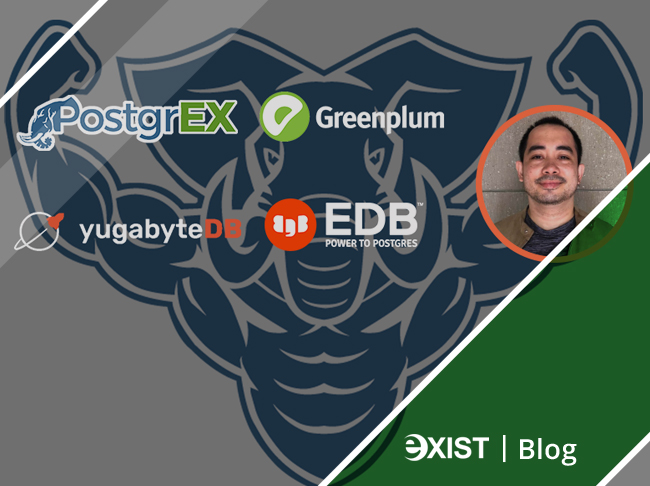 The Elephant Behind the Excellence

The preceding year, 2021, was an eventful year for EXIST Data Solutions: new team members were added, new technologies were learned, and new projects were implemented.

In the enterprise database front, PostgrEX was implemented in a prestigious 5-star hotel and casino, a state university, and a major security agency handling the biggest mall in the country.

YugabyteDB, the No. 1 cloud-native, distributed SQL database in the world, was implemented in 3 government projects, and premium EnterpriseDB support was rendered to the country’s primary energy market corporation.

On the data analytics front, Greenplum was also successfully implemented in 3 government projects, thereby enabling these entities to turn their data into actionable insights.

But what do all these business-transforming technologies have in common? In a word: Postgres.

Postgres is the database engine upon which PostgrEX, YugabyteDB, EDB, and Greenplum are based. With most of them, modifications in varying degrees were done to core Postgres to deliver a product that is still Postgres, but better!

As indicated in the article, Databases in 2021: A Year in Review, the dominance of Postgres in the year 2021 was undeniable:

The conventional wisdom among developers has shifted: PostgreSQL has become the first choice in new applications. It is reliable. It has many features and keeps adding more. In 2010, the PostgreSQL development team switched to a more aggressive release schedule to put out a new major version once per year (H/T Tomas Vondra). And of course, PostgreSQL is open-source.

One measurement of the popularity of a database is the DB-Engine rankings. This ranking is not perfect and the score is somewhat subjective, but it’s a reasonable approximation for the top 10 systems. As of December 2021, the ranking shows that while PostgreSQL remains the fourth most popular database (after Oracle, MySQL, and MSSQL), it reduced the gap with MSSQL in the past year.

Another trend to consider is how often PostgreSQL is mentioned in online communities. This gives another signal for what people are talking about in databases.

What does all this mean for you and your business? It means you can entrust your most mission-critical applications to Postgres and its derivatives; it means you can break free of vendor lock-in and redirect cost savings to core business initiatives; it means your company can be a better version of itself–a more profitable version–in the year 2022!

Contact us and find out how EXIST Data Solutions can meet all your database-related requirements.

Explore the next level of your digital transformation journey with big data and analytics. Let’s look at opportunities to better maximize your ROI by turning your data into actionable intelligence. Connect with us today, and we’ll proudly collaborate with you! Introducing PostgrEX: How to Fulfill Your Database SLAs Without Having to Sell a Kidney

In a past blog post, I gave the definition of software as being enterprise-grade in the following manner:

A piece of software is enterprise-grade when it caters to the needs of not a single individual, nor a select group of individuals, but the whole organization. When applied to database management systems, an enterprise database is an implementation of database software that serves the organization by managing their humongous collection of data. It must be robust enough to handle queries from hundreds to tens of thousands of users at a time. It must also have a host of features that are geared towards improving the productivity and efficiency of the organization, such as multi-processing, parallel queries, and clustering, to name a few.

To tease it out a little bit further, I would like to propose that a database implementation is “enterprise” when it possesses the following attributes:

1.    A database engine that has proven itself in a multitude of business applications globally in a span of decades

Traditionally, enterprise database implementations have been costly investments and organizations have been willing to pay the price given the criticality of data to any business endeavor. But given the current economic climate brought on by the COVID-19 pandemic, along with the perennial need for businesses to streamline costs in order to divert savings into the core business, many are asking: Is there a better, more cost-efficient way of implementing a database solution without sacrificing enterprise-ness?

The answer is most certainly! Let me introduce you to PostgrEX.

It is an enterprise-grade database platform built on top of a purely open-source technology stack and is part of EXIST Software Labs Inc.’s Data Solutions.

What are the components of PostgrEX?

1.    Scoping and sizing of DB hardware

We will recommend the hardware specifications (memory, CPU, storage, networking, etc.) that will be optimal for your business requirements based on the current and projected data growth, the total number of users, total concurrent users, largest table size, largest query size, etc.

We will install the database system, along with the high availability/failover, monitoring, backup/recovery, and connection pooling components.

We will optimize the database configuration settings for the best possible performance given the hardware available.

We will also set up and configure Patroni, etcd, and HAProxy as part of the failover mechanism of the system.

We will install, set up, and configure pgCluu as the default DB cluster monitoring tool.

We will install, set up, and configure Barman as the default DB backup and recovery management tool.

We will install, set up, and configure pgBouncer as the default DB connection pooling tool.

We can also provide query optimization services to your Developers in order to ensure tip-top application performance.

We can migrate your existing SQL Server, MySQL, and Oracle databases to Postgres CE.

What are the technologies used by PostgrEX?

Postgres, or PostgreSQL, is arguably the best open-source object-relational database management system available today. It was DB-Engine’s “DB-of-the-Year” for 2 years straight (2017 and 2018), and has proven itself in mission-critical applications across all industry verticals.

See: Why use PostgreSQL for your Business?

etcd – a fault-tolerant, distributed key-value store that is used to store the state of the Postgres cluster. See etcd documentation.

HAProxy – provides a single endpoint to which you can connect the application. It forwards the connection to whichever node is currently the master. It does this using a REST endpoint provided by Patroni. Patroni ensures that, at any given time, only the master Postgres node will appear as online, forcing HAProxy to connect to the correct node. See HAProxy documentation.

Is your organization ready to face the challenges of an uncertain future? Having enough money in the bank is certainly a top priority and doing away with unnecessary and exorbitantly-priced database license costs is one way of doing this.

With PostgrEX, your business applications can still enjoy industry-recognized, top-level, enterprise database excellence through the use of expertly-configured, purely open-source technologies. This means you get to keep your kidney to live and fight another day—and many other days!